Galapagos
The Voyage of the M/Y Grace

Facebook
Twitter
LinkedIn
To honour the natural beauty of the Galapagos I chose the elegant M/Y Grace.

IT LOOKS LIKE WE ARE CLOSE TO THE DAWN OF TIME

Sailing aboard the M/Y Grace, I see before my eyes the story of how life triumphed in the unforgiving Galapagos, some 1000 km off Ecuador’s coast, right on the Equator. The yacht cruises the archipelago with unparalleled style. She was Grace Kelly’s honeymoon yacht and remains true to her namesake. The lines she carves in the water evoke the journeys of another legendary vessel: The Beagle.

Why should anyone come to these volcanic rocks in the Pacific? The islands tell a tale of life’s resilience and they reveal the foundation of our current understanding of life. As I snorkel with hammerhead sharks and play with sea lions, I need to remind myself that, despite all the fun, this trip also holds a crucial existential meaning for me. 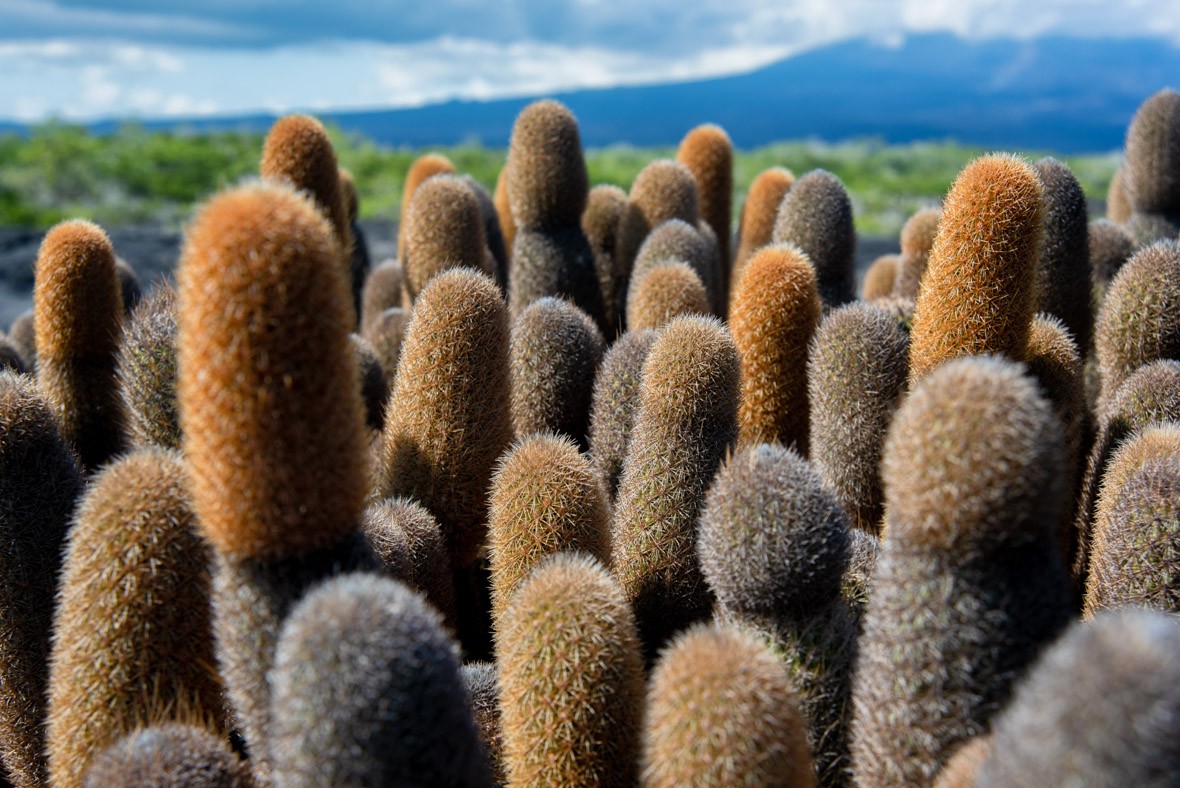 Forged by fire, the Galapagos emerged from underwater eruptions, from a hotspot in the Earth’s crust. To this molten archipelago, trade winds and albatrosses carried the seeds of pioneer plants that created a habitat other species could occupy. Carried by vegetation floats, defying the incommensurable wastes of the ocean, reptiles eventually colonised the Galapagos.

Three ocean currents meet in the archipelago, bringing a hefty amount of plankton. This attracted more birds, which in turn brought with them more seeds. Thus the Galapagos became a realm of birds and reptiles.

It is early in the morning when I leave the comforts of the M/Y Grace for the shores of Fernandina. I hike among thousands of iguanas in the lava field. This is a landscape where mankind has left no signs, where you get your bearings from the volcano and the endless ocean. I find a cactus, a pioneer who seems to have sprouted straight from the molten rock. Absorbing water from the air rather than the soil, plants such as these shaped a land where animals could survive.

GO TO THE GALAPAGOS WITH BLUEFLOWER

I sit in silence, watching the iguanas, listening to the birds and the crashing of the waves. I can see the seals from my spot, and the water is so clear that I catch a glimpse of a manta ray gliding by the inlet, followed by a company of marine turtles. The spectacle in front of me was described by Darwin as what it would have been like when life first appeared on Earth:

“Considering the small size of these islands, we feel the more astonished at the number of their aboriginal beings, and at their confined range. Seeing every height crowned with its crater, and the boundaries of most of the lava-streams still distinct, we are led to believe that within a period geologically recent the unbroken ocean was here spread out. Hence, both in space and time, we seem to be brought somewhat near to that great fact—that mystery of mysteries—the first appearance of new beings on this earth.” –Charles Darwin, The Voyage of the Beagle

The mystery of life remains despite modern advances and cutting-edge hypotheses. Sitting on a rock, listening to the finches, I feel a connection with our origins, whose appeal is a sense of purity before the sorrows and the corruptions of the world, before our shortcomings, of Eden lost… yet it might just be in front of me; and had always been in me, if I looked.

The origin, that which is elemental and fundamental, does not necessarily lie on the far side of aeons, but rather, it is accessible when we reconnect with the beauty of a world we have separated ourselves from. This is what I came to search for in the Galapagos. 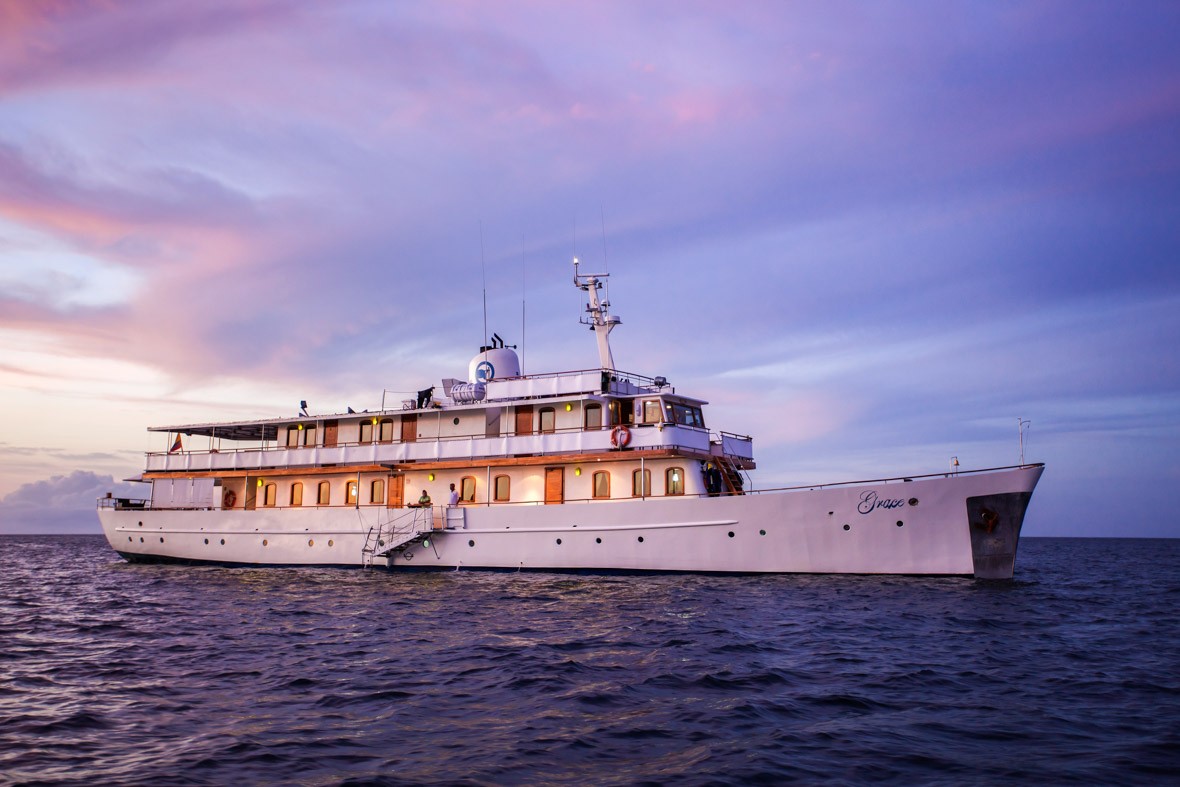 Commissioned in the late 20’s, the M/Y Grace changed hands frequently until the 20's roar turned into blast and tumult. She was conscripted in 1939 for the war effort by the Royal Navy. In 1940, she captured a German E-boat near the Isle of Wight and a year later she had an encounter with the dreaded U-boats. After the war, Sir Winston Churchill cruised on her and thus a streak of celebrity began in earnest. In 1951, Aristotle Onassis gifted her to Prince Rainer of Monaco and Grace Kelly as a wedding gift.

In the north part of Isabela, the largest of the islands, Punta Vicente Roca sits exactly on the Equator. From its cliffs, the blue-footed albatrosses dive at 60 km/h to catch their prey, while pods of seals warm up on the rocks, enjoying the show. Sandy and I dive in for some truly spectacular snorkelling.

This is where the magic happens: tropical fish, mantas, turtles, marine iguanas, hammerhead sharks. The seals come close, really close and summersault in front of us. One turtle passes by, then another and another until more than a dozen are all around us. Two are mating. The lack of predators has left a lot of time for reproduction. Evolution moves fast in the Galapagos; it is because of the animals of this archipelago that we first understood evolution, which transformed our entire conception of life.

First, it was the turtles, then the finches, that sparked a little idea in Darwin’s mind during his visit to the islands. The governor of Floriana boasted to Darwin that he could recognise from which island a turtle came from, just by looking at its shell. From these humble beginnings would eventually develop the Theory of Evolution by Natural Selection. 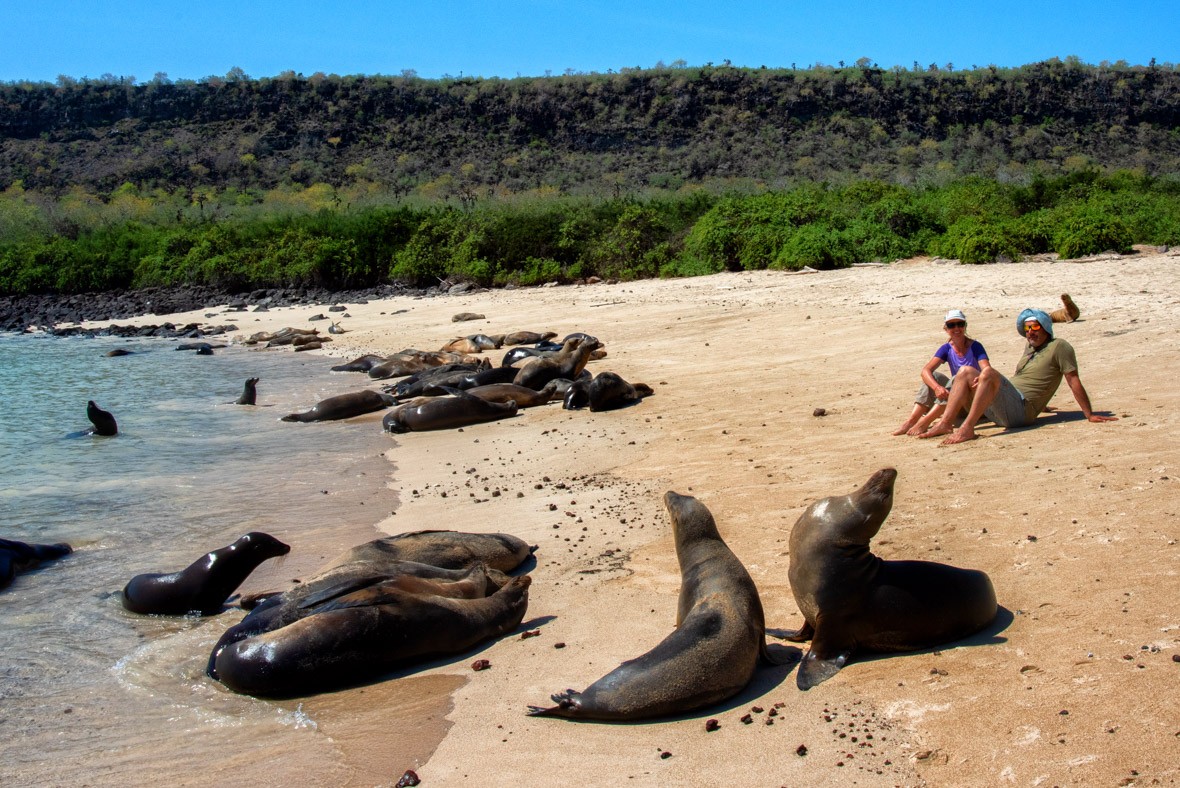 In the Galapagos, life evolved in isolation. Each island is isolated from the others but not excessively so. Some animals would eventually make it across, adapting to new environments, developing distinctive traits… “becoming” new species altogether. Each island fosters its own evolutionary community. As animals moved from one island to the next, they developed into a multitude of species. A classic example is the finches that on each island have a different beak.

“Seeing this gradation and diversity of structure in one small, intimately related group of birds, one might really fancy that from an original paucity of birds in this archipelago, one species had been taken and modified for different ends.

“But it is the circumstance that several of the islands possess their own species of the tortoise, mocking-thrush, finches, and numerous plants, these species having the same general habits, occupying analogous situations, and obviously filling the same place in the natural economy of this archipelago, that strikes me with wonder.” –Charles Darwin, The Voyage of the Beagle

Darwin had had a tremendous intuition that the full force of genetics could only demonstrate 200 years later: that life evolved from a single origin. It is a mystical and a momentous landmark in the history of humanity. To make sense of it, we used the metaphor of the tree of life, a common root for all life, branching out from a single seedling. The tree spans all domains of life, from the archaea in the bottom of the sea to the condor that carves the sky. Curiously, we couldn’t resist the urge to place man on top. 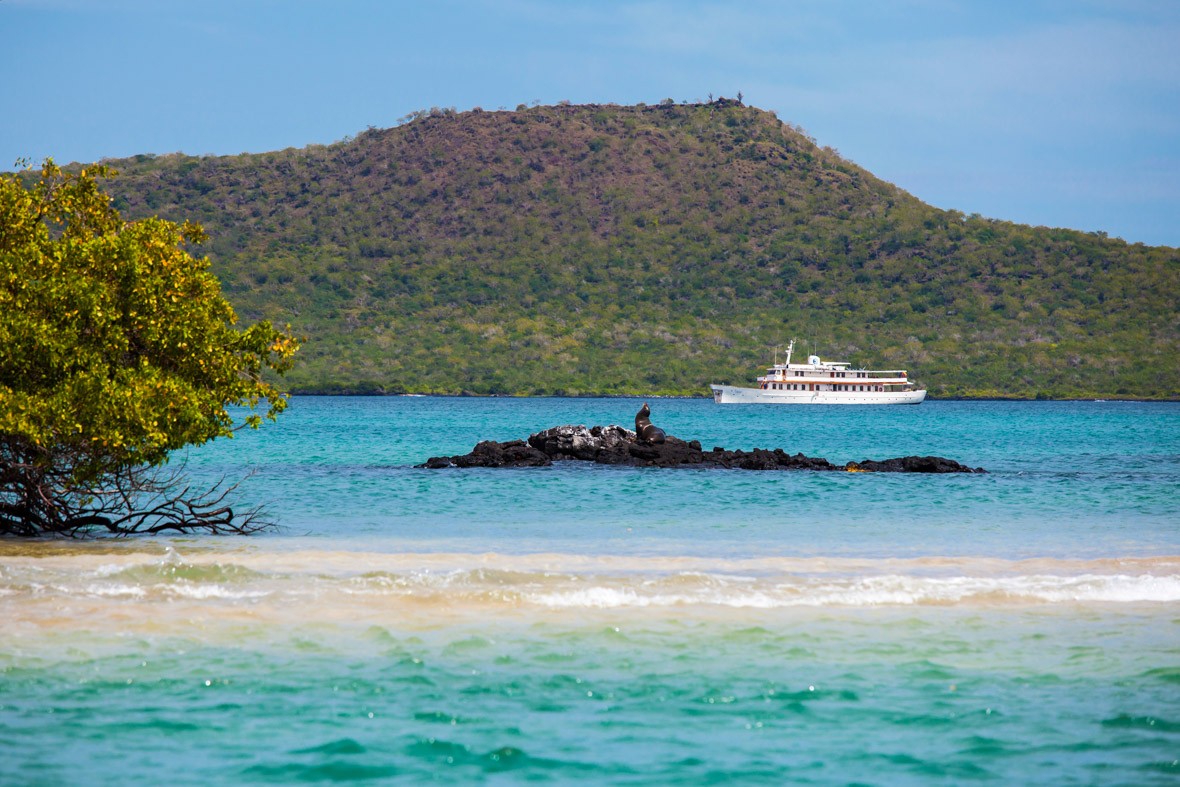 M/Y Grace sails the Galapagos with unparalleled style. The M/Y Grace has 9 rooms which can accommodate a total of 18 guests. This leaves ample room for outside areas and decks, unlike other vessels where most of the space is indoors. The yacht is manned by one Crew Director and 9 crew members. Hiking, swimming, snorkelling and kayaking are only a few of the many activities and days usually end drink-in-hand with thousands of stars above, after a delicious alfresco dinner.

The astonishing implication of a single origin is that we are just another creature, another animal in the multiplicity of life. Another astounding corollary of evolution theory is that there is no betterment in evolution, just adaptation. The species that have survived are not inherently better than those that are extinct. A careful reading of Darwin reveals that the fittest is not the best, rather the better adapted to environmental circumstances. We are not really the pinnacle, just part of Nature. What a rewarding conclusion.

"After you have exhausted what there is in business, politics, conviviality, love, and so on — have found that none of these finally satisfy, or permanently wear — what remains? Nature remains; to bring out from their torpid recesses, the affinities of a man or woman with the open air, the trees, fields, the changes of seasons — the sun by day and the stars of heaven by night."

It is sunset and I find myself, gin and tonic in hand, watching a volcano from the deck of the M/Y Grace. The yacht crosses the Equator again and a pod of dolphins accompany us from the bow. What strange force moves it all? And can I even make sense of it?

Against all odds, the species that made it to the Galapagos adapted to this unforgiving landscape, they thrived… and therein lies the lesson, something that the tortoises, the iguanas, the finches, the cormorants, the penguins, the albatrosses and the seals know instinctively: the power of renewal.

“Make it New!” cried the Modernists of the last century, after Ezra Pound’s phrase. The animals of Galapagos teach us that it is not about novelty, but about recurrence and renewal, and a deep connection to that which was before, even onto the very start. To make it new. This is why life succeeds. 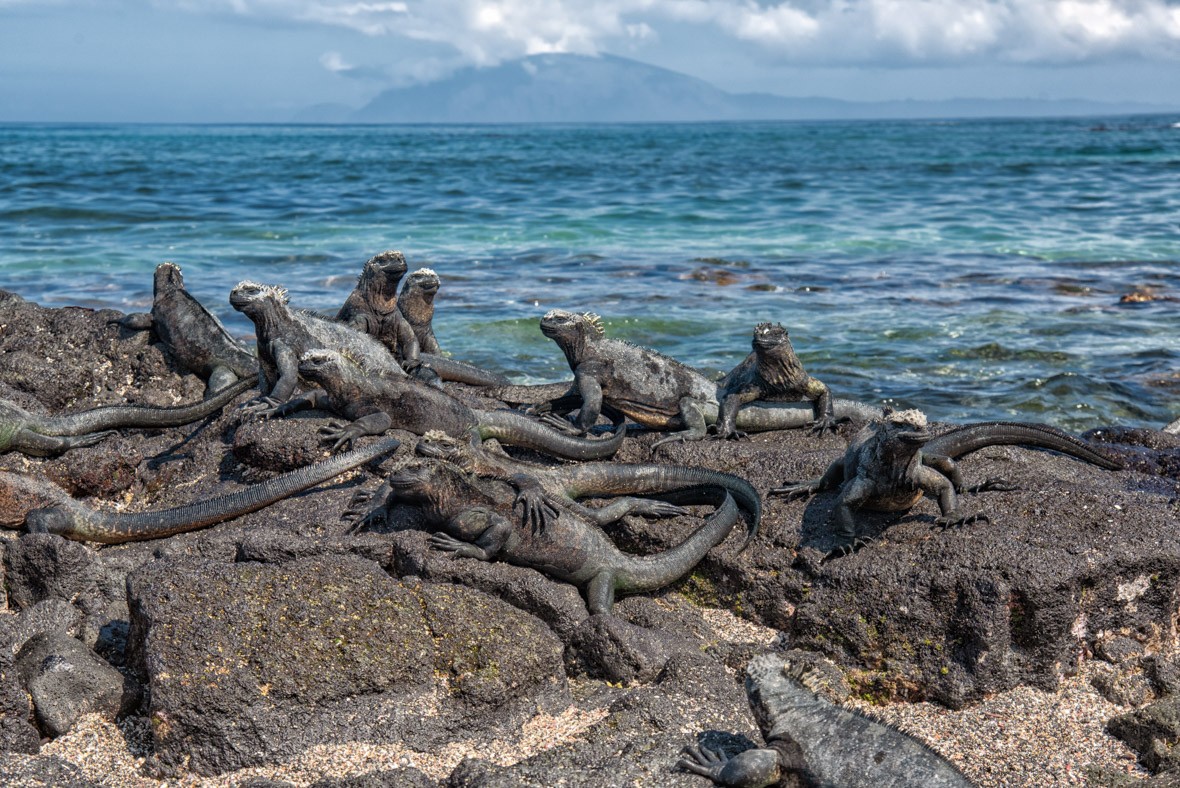