Sweden
Arctic travel for self discovery

I came to Lapland for the aurora, and in the journey discovered the deep north. It is a sparse monochrome surface of still wilderness which evokes a rich sense of space and time. Beauty appears in unexpected forms: a hue in the sky, a line in the snow, a forest, a birch tree, a wild mouse running in the deep snow. A frozen river bend, and the crackling fire by the camp… a candlelit window that beacons in the dark. I discovered a place for introspection and reflection.

The huskies are barking loud, they want to be let loose on the snow, they want to run and to be chosen, they are gripped by what Jack London called the incomprehensible pride of the trail and trace. The musher has had his picks, and I help him harness the dogs. Jonne is the lead dog in my team. One eye blue, one brown: a sharp look. As I step on the runners, the dogs are already pulling the anchored sled. They want to run, they are dying to do so, to heed the call of their nature.

“Mush! Mush!”, I say, and the energy is released. Forward, into the wild. 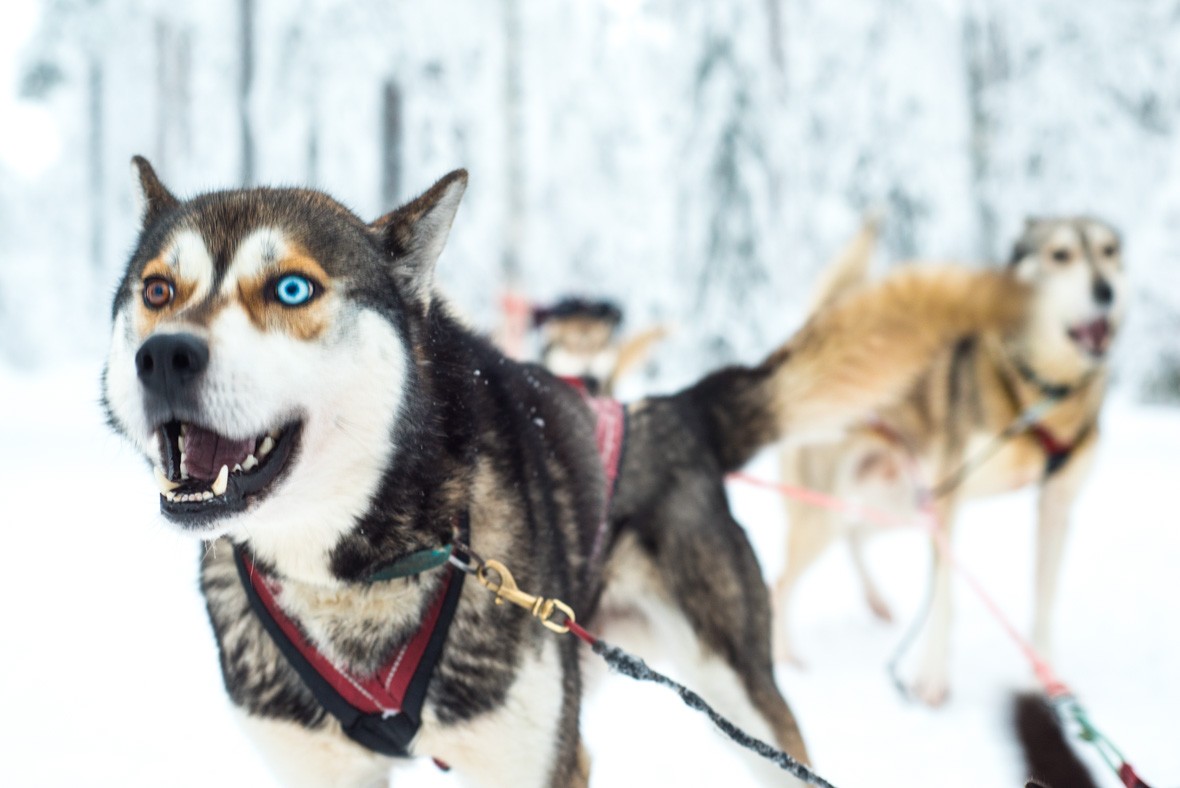 On this trail with the dogs, is where the north reveals itself to me for the first time. The silence is only broken by the panting of the dogs. Travelling at speed on the dogsled, the arctic comes to life.

Micke Suorra has a hideout in the forest. His people, the Sámi, know the way of the wild. Most of them have moved to comfortable Stockholm. However, he has kept his connection with the arctic. From his hideout in the forest, he takes us on a safari in the snow. The big five of Africa are matched here by the great eight: bears, moose, lynx, eagles, whales, wolverines, wolves and reindeers.

Lars Eriksson, another Sámi, is pouring hot blueberry juice into my wooden cup. He has been a reindeer herder all his life.

“Six families used to live here,” he says. He and his wife are the only ones left.

The timber homes of the north are cosy. The light and the warmth of the stoves contrast with the cold outside. Lars continues his story.

"The days of the past are gone", he tells me. "There are no more migrations. I used to move my herd to the coastline on ski. Now the reindeers are moved by lorries. Roads have encroached upon the wild… The climate is changing.”

Today, to make a living as a herder, his family would need at least 1,000 reindeers. Should he embrace change, and give up his traditions? It is a question that has been up in the air for the Sámi for decades. 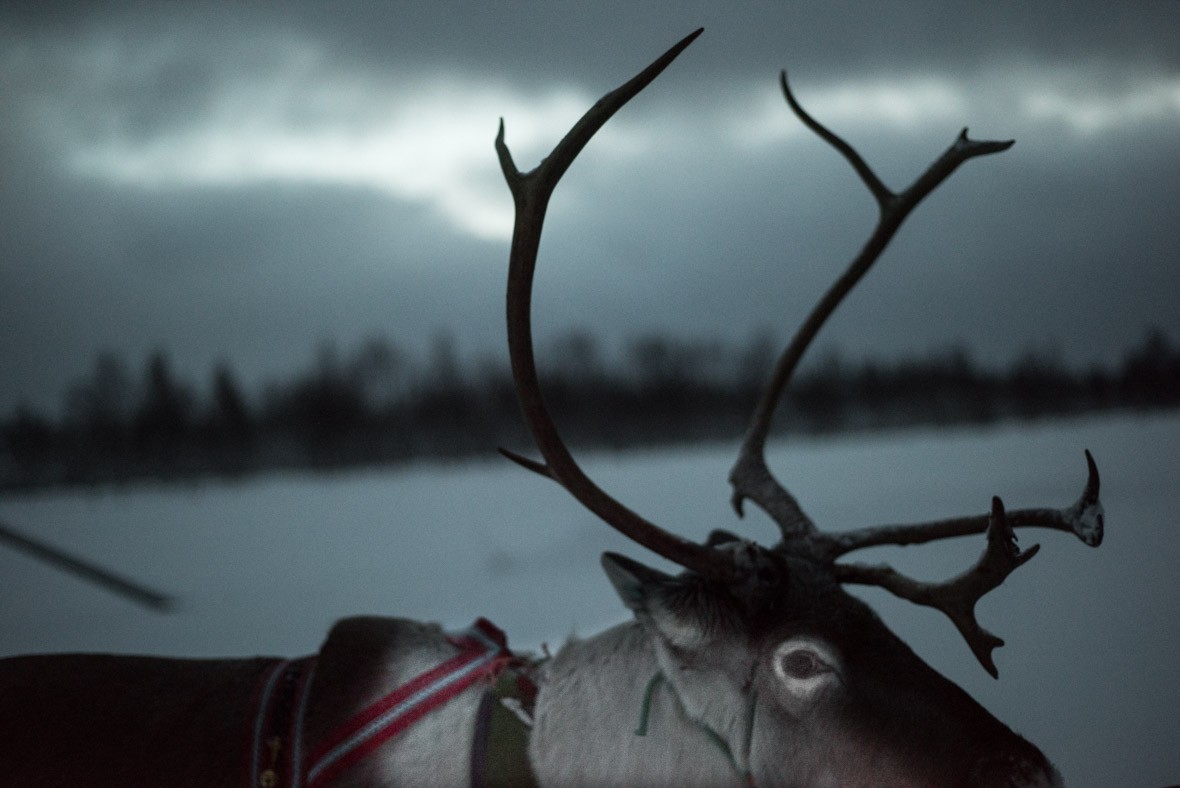 Lars has found a way to match the old ways with a new life. He stayed in the north. He keeps a few reindeers that are his life companions, and he shows tourists the way of the Sámi.

His face fills with pride as he tells us about the traditional dress of his people. His garment of contrasting, bright colours, is adorned at the hems with embroidery and sewn bands. The high collar gives him a solemn look. Indeed, this is what the Sámi wear for ceremonies… and for herding. At the waist, he dons a magnificent belt with silver buttons. These are square, it means that he is married. 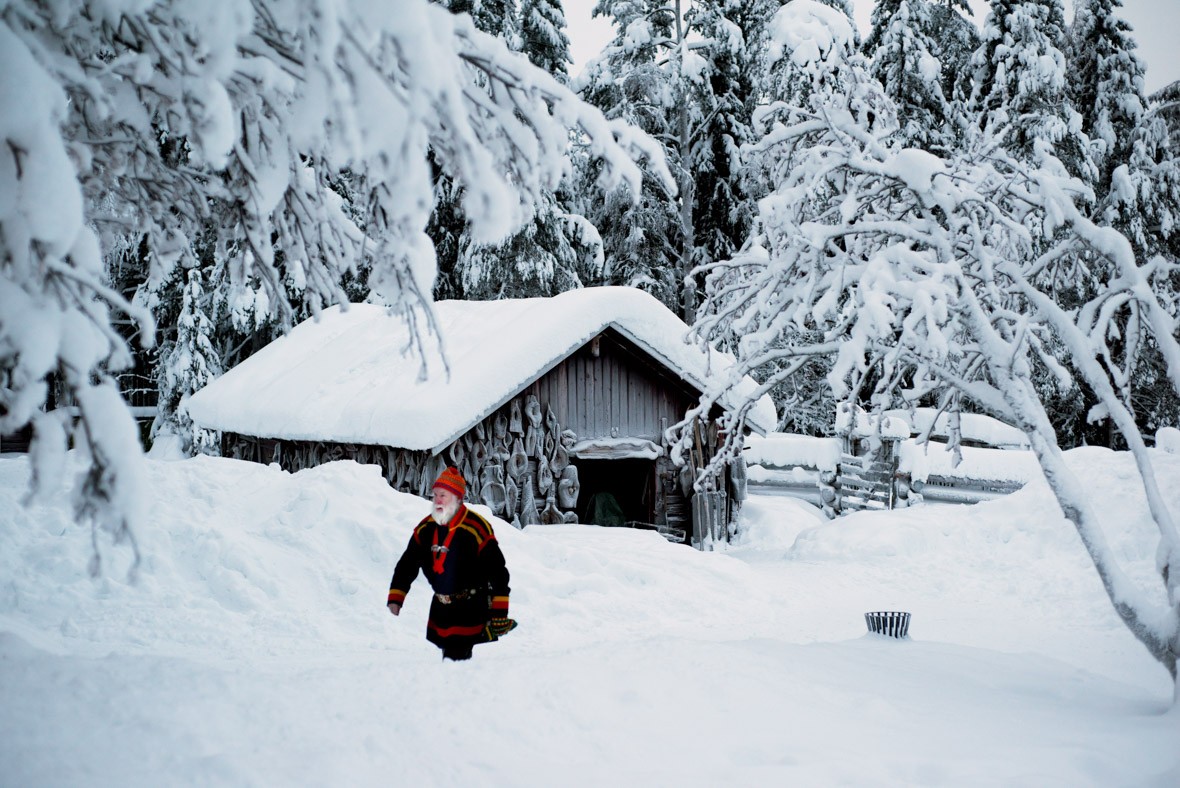 He tells us of the ways of the North. How to connect with nature.

“The wilderness is our supermarket,” he jokes. “We forage for berries and mushrooms, and all the tools and clothing we need come from the animals and the forest.”

He shows us a drum that is decorated with shamanistic signs.

“We, all of us, are connected with nature,” he explains. “Our selves reflect the forces of the arctic.”

When the main occupation was the timber industry most of the youngsters left. However, people from all over the world are starting to come, to enjoy the snow and the silence. With tourism come new opportunities, and young people are beginning to stay.

We go back to the trails and the snow, this time on snowshoes. When we leave our cabin it is still dark. In the North, the snow reflects even the dimmest lights and the landscape appears to glow. Niklas Wede is the owner of a marvellous arctic retreat, and our guide on this trail.

The going is hard. It is -20°C and we are sweating. We cross a spruce forest and slide down a hill to the shore of a frozen lake. We stop in the middle of the lake to make a fire. Birch bark is wonderful for kindling. We are cooking breakfast in no time. 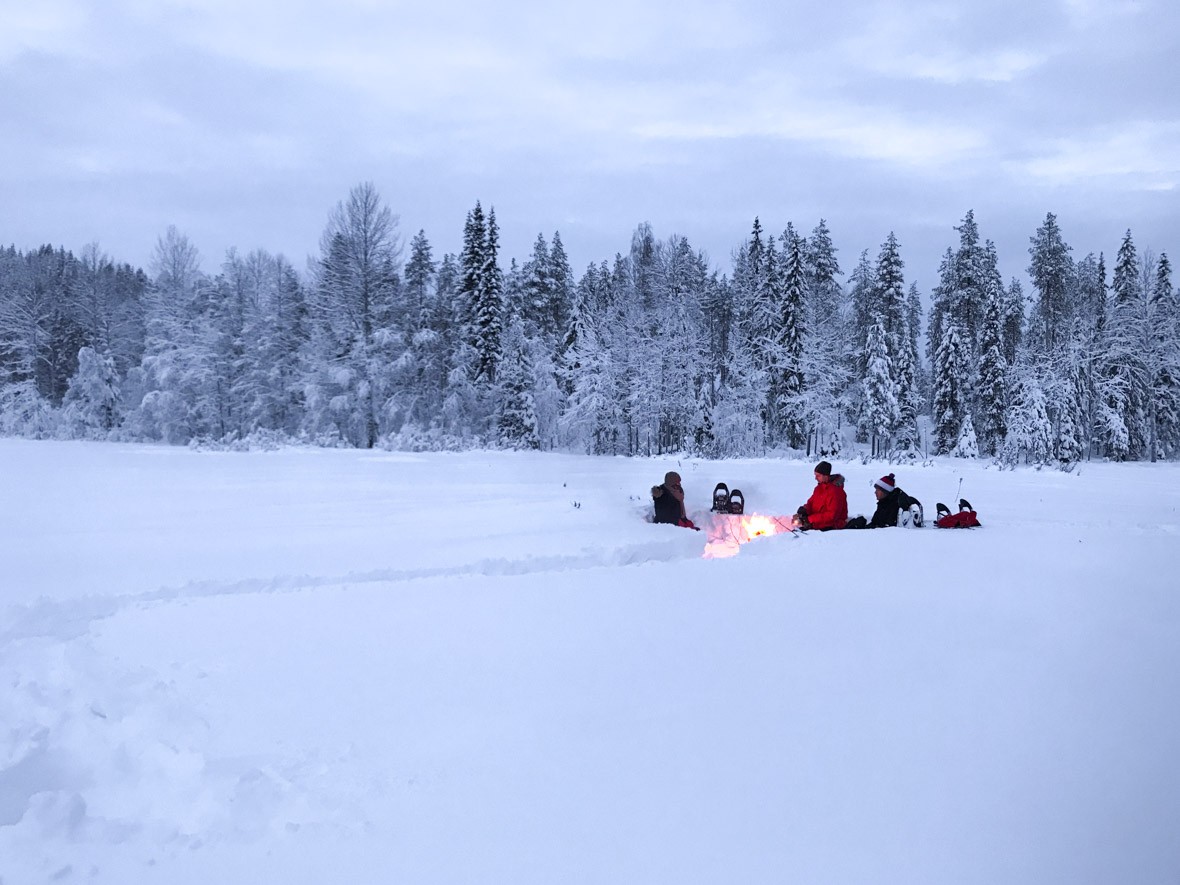 We have spent a week in the north and the sky has always been overcast. We had no chance of seeing the lights. Tomorrow we are going back to the south, to a world more ordinary. We managed to tame our desire to see the lights. Many tourists come here singleminded and become blind to the beauty of the north, of which the aurora is but one feature. Yet, I cannot deny we came here for the lights! Our app says that the sun flares and the winds are suboptimal. Nevertheless, we look at the sky and notice that the clouds are beginning to clear.

To maximise our chances, we stay at Aurora Safari Camp. Fredrik Broman, a renowned nature photographer, built the camp to secure perfect conditions for low-light photography. The camp is on the eaves of a forest near the banks of Råne River, now frozen. Instead of a room, we stay in a Lavvu, a Sámi style tent. When we arrive it is -20°C and we expect the weather to get colder. But inside our tent it is delicious and comfortable, glamorous even. We head to the sauna to get warm, while we delight ourselves with smoked reindeer meat and vodka. The long arctic sunset paints the horizon with yellow, then purple, finally a mantle of pale blue falls over us.

After dinner we look for the Lights. A half moon brightens up the lake, it is the only light. Our view to the north is unobstructed… but the Lights are not there. I look upon an amazing sky, filled with thousands of stars. The ample firmament ignites my curiosity. What is out there? What is beyond what is apparent? There is so much we cannot see! I am awed by the immensity of the Universe. I am dwarfed by the incomprehensible extension of the Cosmos. Gazing out into the vastness of the sky, I suddenly turn inward, and look for my true self.

I go to bed with my thoughts.

“Andrea! Wake up! She’s here,” says Fredrik as if from a dream.

“Two in the morning…”

I realise what is happening and scramble out of my tent. At first, Aurora is not the huge foxtail moving across the sky, but a line in the horizon… 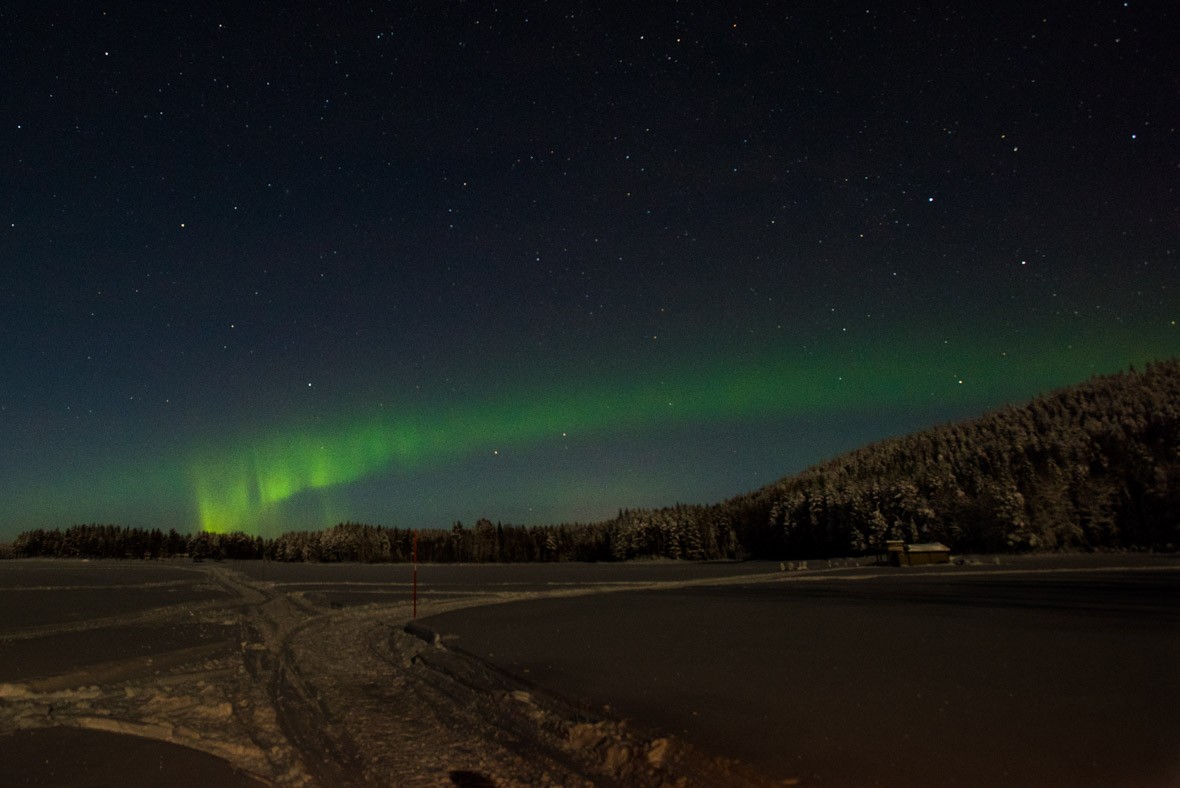 Suddenly, it starts glimmering. My heart races with excitement. At first glance, the immensity of the universe makes us feel our smallness, and that of our planet. “A mote of dust suspended in a sunbeam,” said Carl Sagan. But he also remarked that we are made of starstuff. The Sámi feel this connectedness with the Universe. My heart beats faster, the emotions build up in my chest. The stillness, the vastness, the lights, the beauty.

From Stockholm you can take a short domestic flight to Luleå. The region is full of lakes and rivers, and is very difficult to navigate during the summer. During the winter, unless you have a lot of experience travelling in the Arctic, it’s best to have a guide with you.

Aurora Safari Camp, owned and funded by nature photographer Fredrik Broman, is without a doubt the purest experience of the Arctic and the Northern Lights that you can possibly have.

What to do there

There are many activities both in summer and winter. During the Summer fishing, camping, tracking wolves. With the pardon of Norwegians, the Swedish arctic is a top-spot for friluftsliv. During the winter things get really exciting. Dogsledding is a wonderful choice and you can cover a lot of ground when the otherwise intransitable terrain is covered in snow. The premium experience is, of course, the Northern Lights.

November to March is best to see the Aurora. Would you like to go on the same trip I did?Click here for the details.