“I saw in my mind a landscape of illuminated stems that, like the dormant seed in a dry desert, quietly wait until darkness falls, under a blazing blanket of southern stars, to bloom with gentle rhythms of light.”
Bruce Munro, artist

A dozen men-like silhouettes walk through the luminescence of 50,000 spheres of light. Gently rocking in the night breeze of the desert on their fibreglass stems, the spheres dimming from red to blue through purple and white. In the darkness surrounding Uluru, we encounter the monolith rock in the heart of Australia, 450 kilometres away from the nearest city. The silhouette moves around invisible lines. Along those lines, they trace their story. Everyone's story. And it's called Field of Light.

Let's take a step back. Twenty-four years ago. 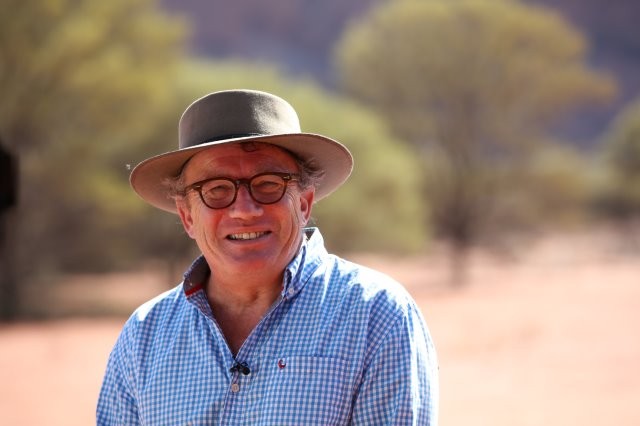 Bruce Munro, the British artist best known for his immersive, large-scale and light-based installations, was "blown away" by Uluru.

Bruce Munro, the British artist renowned for his immersive, large-scale, light-based installations, was visiting Uluru in 1992 with his fiancé Serena (now his wife). They camped — it was allowed back then — within sight of the ancient rock that symbolises the indigenous Australian culture.

While stargazing in the darkness of Uluru, Munro wrote down the idea of an installation that would bloom at night, like "dormant seeds bursting forth after rain. I wanted to express that feeling of joy, a mixture of joy and serenity", he said. "This was a private jotting. It wasn't something I ever imagined would go further than the sketchbook".

But instead, it did.

Munro's inaugural Field of Light was installed in the UK in 2004, and the piece of art has since travelled all over the world before "going back home" to Uluru, where it was first conceived, in March 2016. 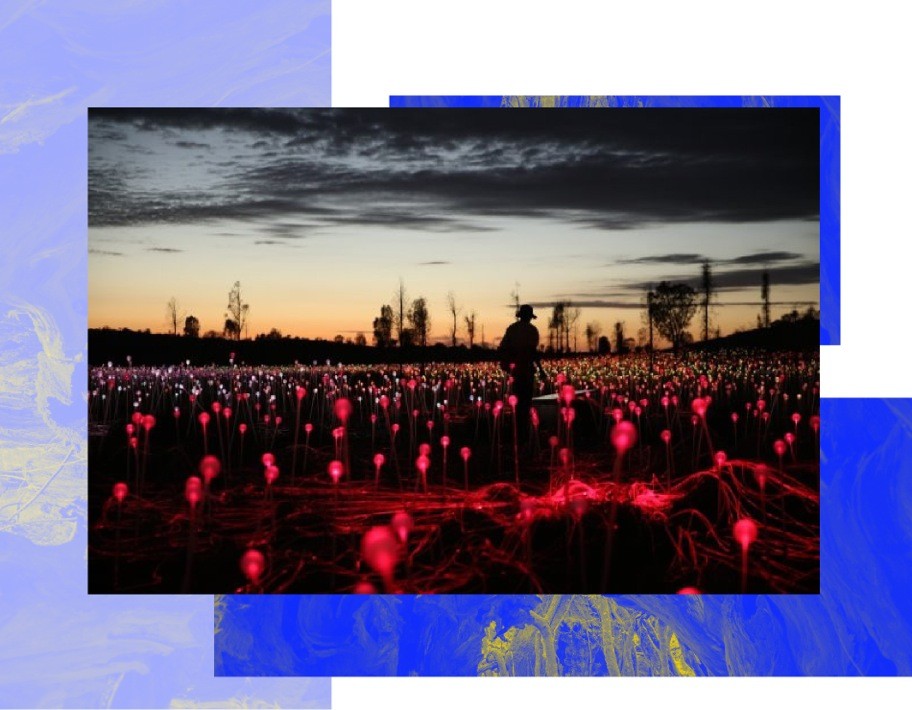 At that point, Munro felt anxious about imposing a Western artwork on a landscape so deeply entwined with indigenous culture. "This is really just me trying to express how much Uluru changed me," he has stated to the local press. "I'm not being corny, but it did change my life. There's not a day that I don't get up in the morning and say thank you to Uluru. It blew me away."

Field of Light will remain until March 2017. You have to fly to Yulara, the tiniest desert airport in Central Australia. It's a 1.5-hour flight from Melbourne or Sydney. 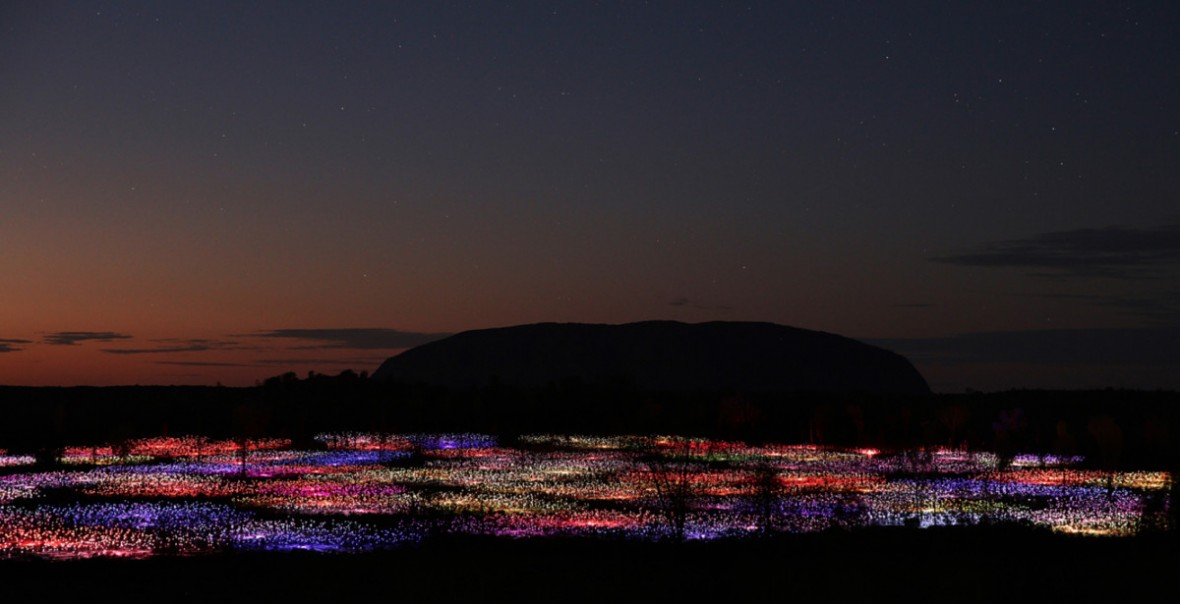 Uluru, once upon a mystery

There are myths and magic embodied in Uluru, and mysteries written all across its rocky, red face. In the aboriginal culture, the monolith originated from of a party invitation that was declined, resulting in blood and the local people's bodies scattered all over the place by a giant dingo.

During Dreamtime, the time of creation, two tribes became enemies: the Mala men of Uluru and the Windulka men of Kikingura. The Windulka invited the Mala to assist in one of their ceremonies, but they refused. Offended, the Windulka called Kalpunya, a huge and evil dingo, to enact their revenge. Full of hatred and malice, Kalpunya reached Uluru so quickly that the Mala people were taken by surprise and killed in their sleep. The Rock represents the story, the Dreamtime creation, of this gruesome myth. Every cave, every carving has a meaning, or the name of one of the old Mala people who were killed; their soul embodied in the rock. 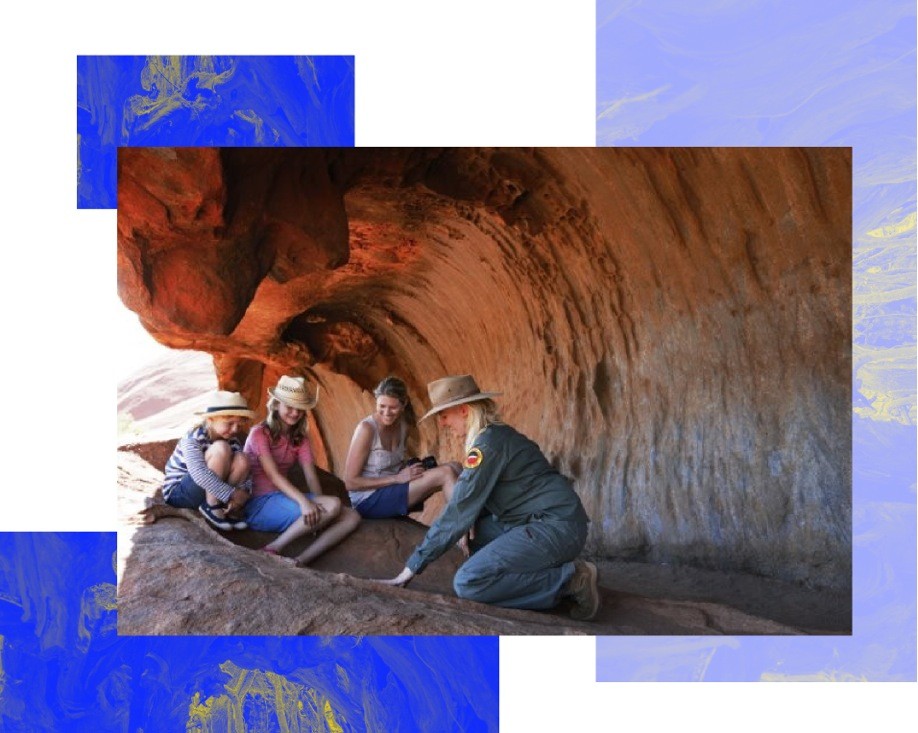 The Rock used to be a shelter for locals, but also a school, a communal kitchen, and a place where the elders would make decisions for the community

Ayers Rock lies close enough to the geographic centre of Australia to make it the supreme symbol of the hinterland known as the Outback. Some anthropologists claim that the Olgas, 35 kilometres to the west of the Rock, are of even more powerful mythic significance than Uluru: these "giant potato"-looking rocks abound with petroglyphs, paintings and arrangements of stone meant to be visible memories of ritual and ancestral activities. 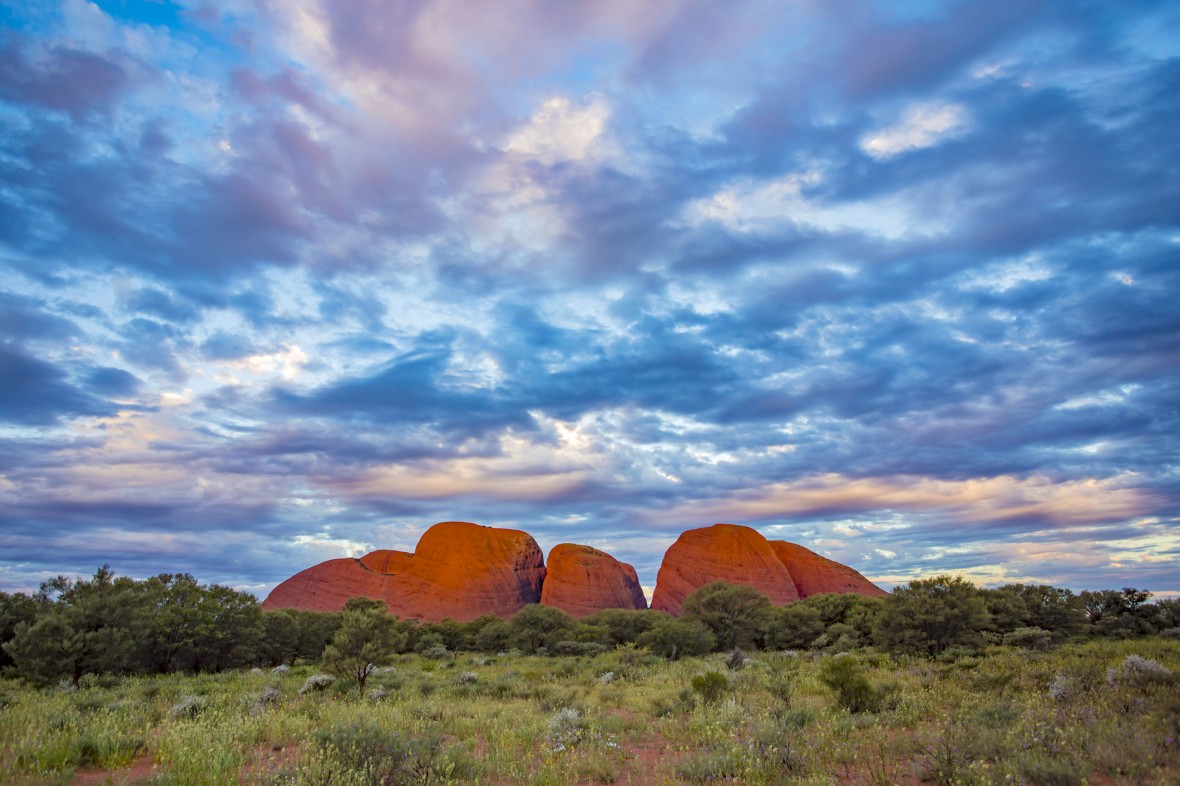 Katatjiuta, or "many heads" in the local language, bears visible memories of ritual and ancestral activities

A unique resort in the red desert

Hospitality in the Uluru and Katatjiuta National Park relies on a single, well-managed resort that has a wide range of accommodation choices, from backpacker lodges to 5-star apartments. But the best part is the activities: sunrises and sunsets facing the Rock are the stars of the package, and there are many different ways to enjoy this peaceful, unique moment: from breakfast at the camp to elegant dinners on the thin, red sands. And then camelback rides, garden wanderings, aboriginal culture workshops and lectures. Uluru is a place to visit, enjoy, breathe in and learn from.

The best time to visit Ayers Rock is during the Australian winter (May to September) when the desert has turned into a colourful garden of wildflowers. The rest of the year can be brutally hot, with temperatures soaring up to 60oC. 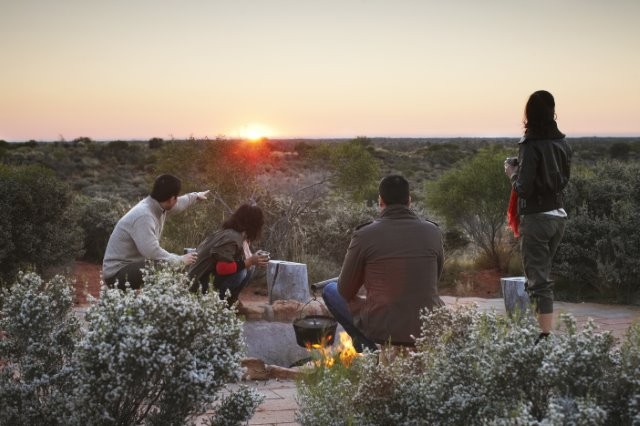