Java
My sojourn with the spirits

The human soul is drawn to certain places, like a moth to the flame. As the day begins, and I gaze to the mists that cover the green mountain forests, I set out to uncover the world of the spirits.

I make sure the recording equipment is in order and that the batteries are fully charged. It’s time. We leave our luxurious lodgings in Amanjiwo, and meet with Patrick in the front gate. It would appear to an outside observer, that we were going out for a tour of Yogyakarta, when in fact, we’re going to meet the first of two shamans, who will introduce us to the spiritual practices of Java.

The Island of Java is bursting with energy. There is a pulse that highlights the veins of ancient worship. The many temples of Java seem to be organised in accordance to the more violent, volcanic forces that shaped this land. Mahayana Buddhism, which later became associated with Tibet, has its origins in this place. The island then became a melting pot of Buddhism, Hinduism, and Islam. The traveller has to contend with two geographies, that which can be laid out in maps, and that which would require guidance… of a different sort.

Patrick is a Belgian anthropologist who has been living in the vicinity of Yogyakarta for more than fifteen years now. He has agreed to play the part of my interpreter. We drive to the temple complex of Prambanan, where Pak Sugeng is already waiting for us. He sits on the steps of a small temple in quiet contemplation. He is a spiritual practitioner from an ancient lineage. The temple was built in the ninth century. After it fell in disuse, centuries later, the locals forgot its historic origins. Built by demons, they say.

FIRST SESSION AMONG THE RUINS

The carved adornments of the walls and the steps welcome us ― and threaten us ― with open jaws. The figures carved in stone seem to want to come to life. They are only restrained by the stillness of the rock, but I sense they would spring against me, if given the chance. From the base of the stairs, I look up and meet a terrifying sight. The doorway of the temple is like the mouth of a mythological beast: Caribdis, perhaps. Pak Sugeng calmly gets up, and beckons us to follow him into the gloom.

Introductions are made. I feel tense. Pak Sugeng is examining me, as one would one of the carvings on the walls. I’ve been to many remote places, and I am used to attracting curious looks. What is unsettling is that it’s usually myself who has that analytical expression. Pak Sugeng starts talking with Patrick, who duly translates, and explains.

“Water has an amazing faculty,” says Patrick. “It can pass anywhere it wants. Anywhere it wants! If necessary, it will erode this rock.” He points passionately towards the walls.

That would be a useful power. Pak Sugeng tells me that I could, through exercises and practices, familiarise myself with my element, to become more confident. Water will go through anything to make its way back to the sea. I am told that if I harness willpower and determination, I will succeed in anything I ambition. It so happens, I do see many water characteristics in myself. This has a curious effect on my mood. I must draw an analogy: doesn’t the fortune teller say what you want to hear? Something that is general enough, that applies to almost anyone? 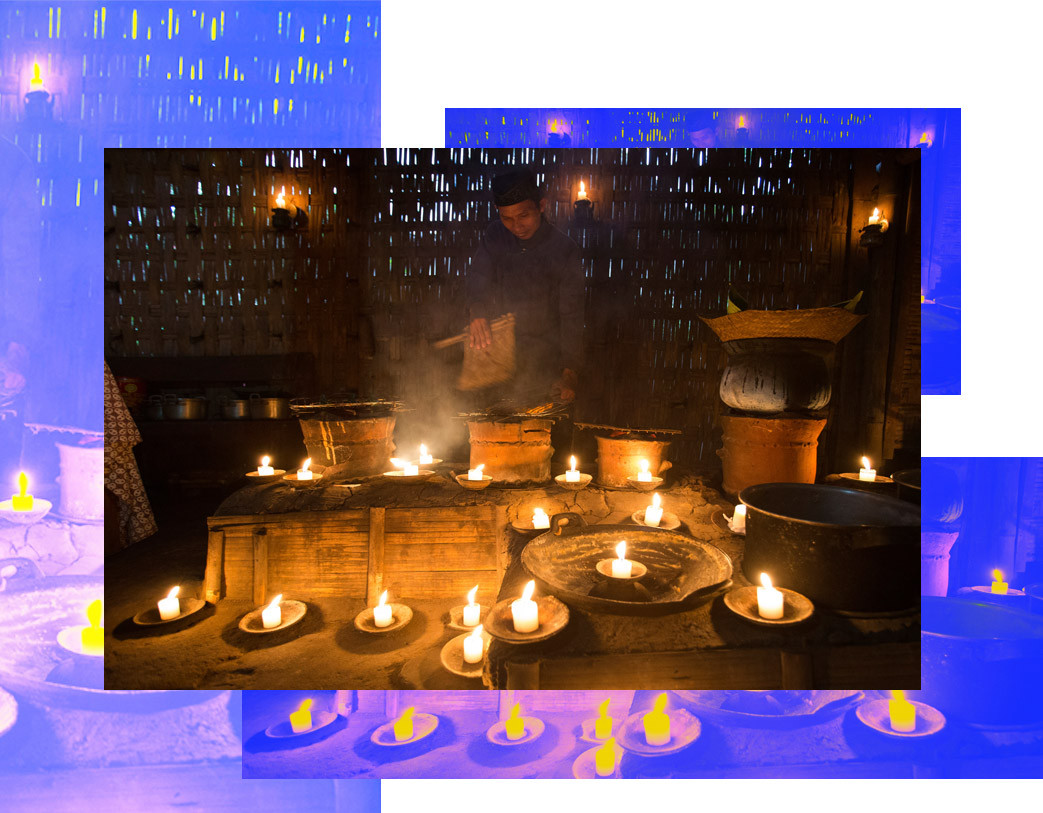 MY RATIONAL MIND STEPS IN

Pak Sugeng warns that Water also has weaknesses: “Water is the giver of life, but it takes no skill to drink from it,” he says. “Water gives compassionately to whatever it touches. That is a quality, but you should watch out, and not trust too fast.”

“So perhaps I should watch out for Patrick,” I respond jokingly. We all laugh, and the tension is somewhat relieved. The matter is settled: I am Water.

The shaman says that he feels we should meditate. Patrick instructs us to try to stay in the present, and not to think too much. “Great!” I say to myself. “Why don't you try to not think of a pink elephant?” We sit down and Pak begins praying. Patrick follows suit. I feel something powerful is happening around me, but I can’t seem to connect with it. I’m thinking about my business. I have one eye open to make sure the video’s still recording. That mosquito bite I hadn’t noticed… well, now it’s all I can think of.

The prayer evolves into chant. Patrick’s baritone harmonises beautifully with Pak’s voice. I don’t understand the words, but the intention is clear. The universal language of music fills the temple and what seemed inaccessible a moment ago, challenges my reason. For every single thing you know, for every single thing you learn, there are a million you ignore. It is easy for westerners to dismiss spirituality as a simple explanation for natural phenomena. As I immerse myself in the melodies of ancient wisdom, it seems to me that spirituality is an acknowledgement, of that which is undiscoverable. I would do better, to keep an open mind. 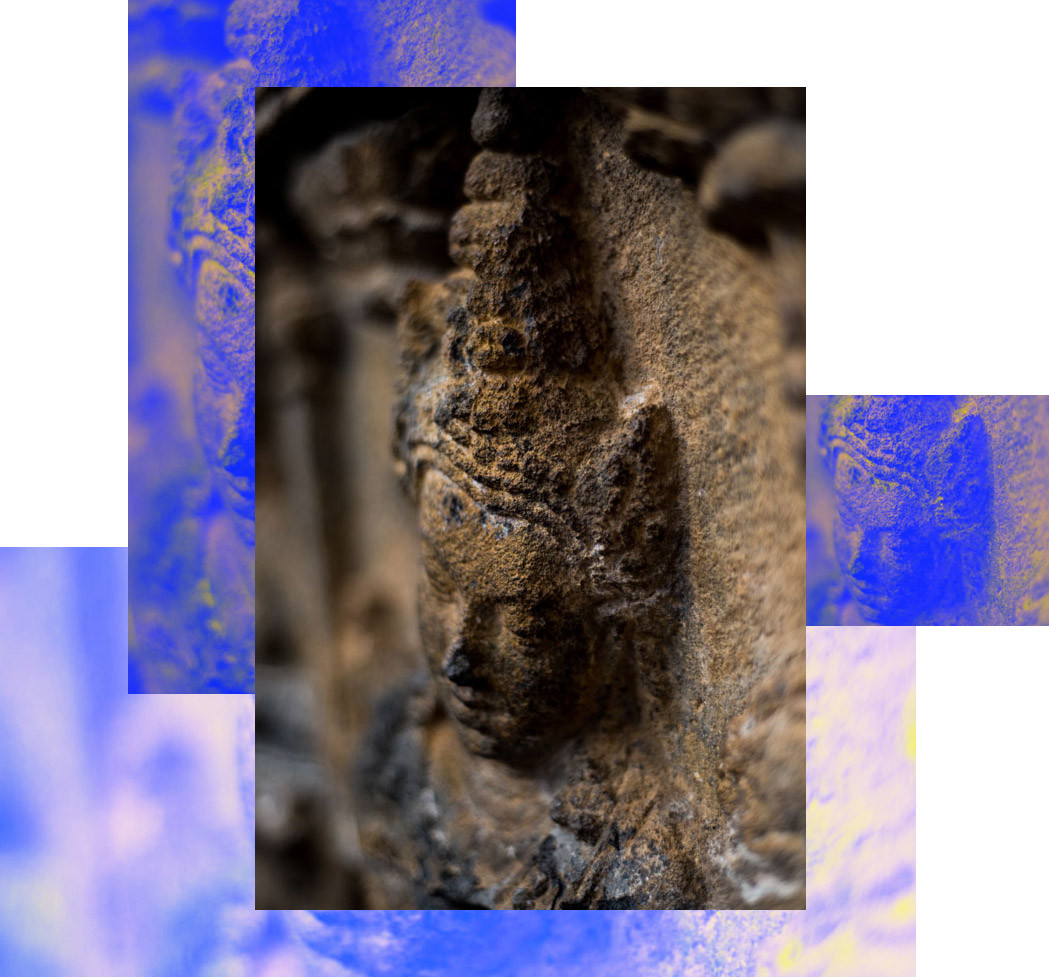 Back in Amanjiwo. The forests are turning blue under the weight of dusk. The evening mists caress the top of the mountains and hide their summits. They could tower all the way up to the sky, and I wouldn’t know it. In those ancient jungles, the mystics of Java have sought spiritual power. Wandering between the trees, ancestor spirits lurk in waiting for a conduit to latch on to. The man I’m about to meet, Joko, has communed with the spirits since he was young. As a result, he has obtained the power to control the elements, to cure the sick, and he has achieved invulnerability. I try to keep a relaxed mind, but hiking in that dark jungle at night with a shaman, fills me with a sense of foreboding.

For the people of Java, the existence of spirits is something that is beyond any doubt. It is as evident for them, as the sun being warm is for me. I can question it, but I will always have the intuition, through experience and common sense, that the sun is warm. For Joko, the spirit world is self-evident. After he achieved a decent amount of power, he decided that his abilities would be best put to use in the aid of others.

SECOND SESSION IN THE FOREST

“When he became a healer,” Patrick explains to me, nonchalantly, “Joko had to get rid of a couple of familiar spirits that were dangerous. These spirits were a threat to the lives of others, especially children.”

Thanks again, Patrick! That will certainly put my mind at ease.

Time is not kind. Even mighty structures, like the temples of Borobudur and Prambanan, fell into disuse for hundreds of years. Javanese mystics turned instead to nature. They will go out to the wilderness and meditate, and speak with the spirits of their ancestors. Patrick tells Joko about my Trigeminal Neuralgia. The shaman claims he can cure me. If he does, he’ll do better than western doctors.

My condition is painful… and unpredictable. Short bursts of pain, like lightning going through your face. It’s tempting to believe. But I don’t. Reason is holding me back. Joko tells Patrick that the cause of my disease is a deeply ingrained virus, he says there is no medical cure for it. However, he claims, the place where we are is a huge reserve of Prana, of cosmic energy. Joko claims that I would benefit from it. I agree to the ritual. 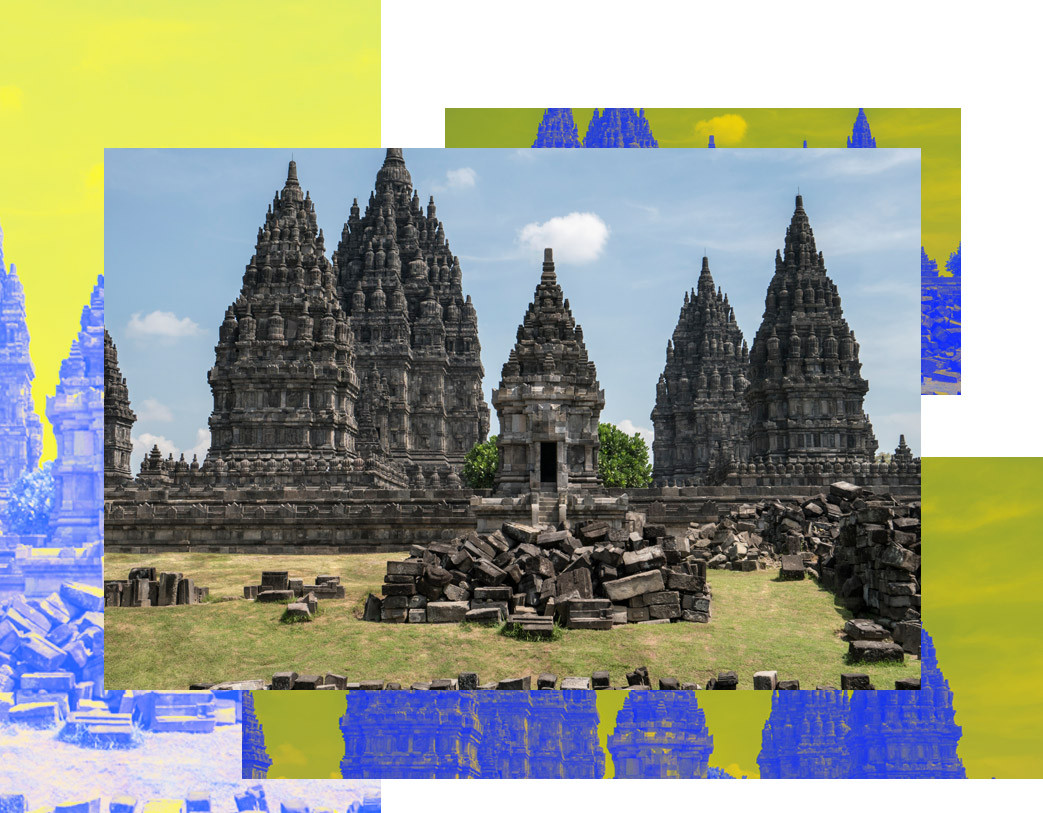 First, I need to be purified. I get into the crystalyne spring waters of this sacred place. Joko and Patrick meditate, and they ask me if I feel any different. I don’t.

I get out of the water and join the meditation. Joko claims that there is a spirit, a ninth century ancestor, who wants to give me something. A gift. I am asked to close my eyes, and I soon find myself surrounded by prayer and the sounds of the jungle. The tension increases. What is Joko going to do? Is the spirit going to spring out of the shadows and reveal itself? Am I going to hear a voice, telling me where to find my present? I must admit, despite the anticipation, foremost in my mind was that itch again… I was only thinking about scratching the mosquito bite.

Patrick claims that the ninth century sword materialised out of thin air. I am skeptical, to say the least. Back in Yogyakarta, it seems easy to doubt things.

“Honestly, Patrick!” I say. “Do you really believe that that sword came out of nowhere?”

Patrick leans back, and calmly chooses his words.

“You know? That is not the point at all. Spiritual practitioners and shamans are encouraged to turn away from their powers. Stopping bullets, or controlling fire, gets in the way of the true spiritual path. What did you expect to see? A Yogi flying through the air?”

My friend chuckles and makes me realise the true value of this trip. I was expecting to step over a clear dividing line, between the secular and the spiritual. That is not the point at all. There is a word for it:

The true path of wisdom is to see the miracle in everything. From the towering temples of Java, to the tiny mosquito that bit me in the hand. You don’t really need a bulletproof shaman for that. It so happens, that sometimes you need one, to remind you of the fact. 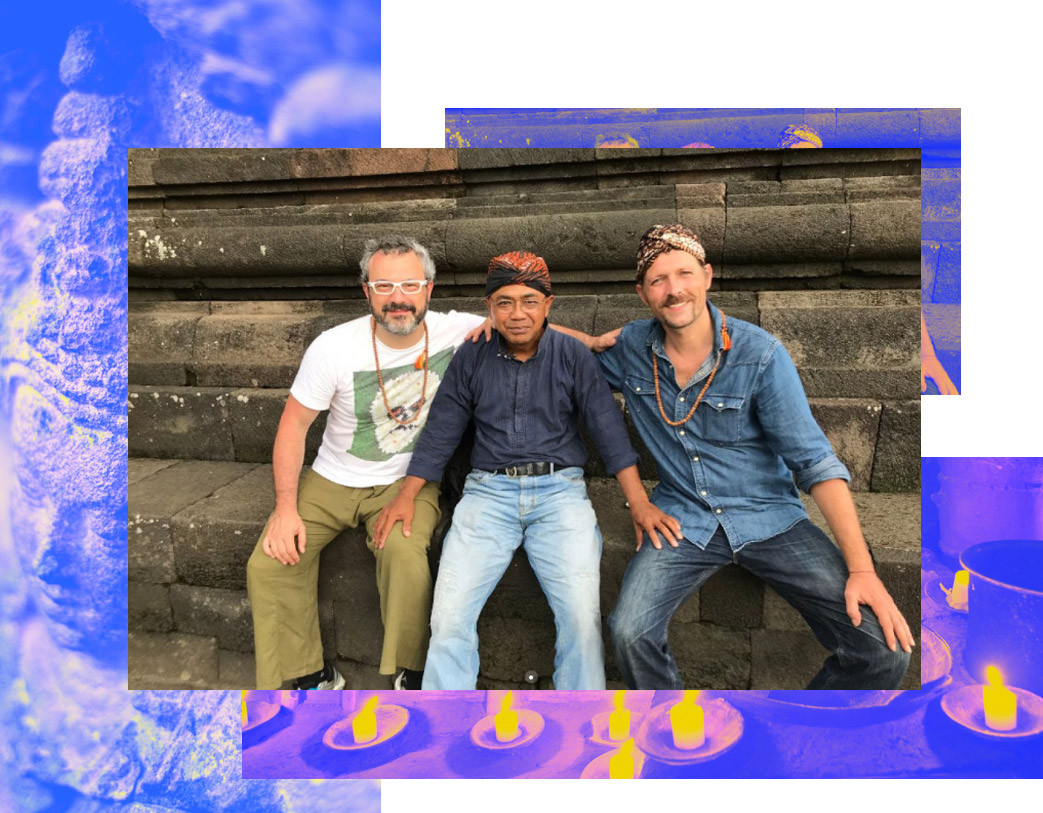 While the average temperature stays pretty much the same throughout the year, Yogyakarta receives a downpour from November through March. Contrastingly, Spring and Summer are quite dry. If you can handle a bit of humidity you can happily avoid the tourist crowds, especially around Borobudur and Prambanan.

Most flights from Hong Kong to Yogyakarta go through Singapore. However, you can fly straight to Jakarta and enjoy a day or two in the capital. The flight from Jakarta to Yogyakarta is short. Alternatively, you can take the train to Yogyakarta. It is a long, an almost 10-hour ride, but you get to see central Java, isolated valleys, and the mystical volcanic influences that have shaped the island.

Amanjiwo should be your first choice. It is luxurious and an experience in itself. The hotel is very near Borobudur.

What else to do there:

Borobudur and Prambanan are the main attractions. However, there are amazing natural sites near Yogyakarta, for example Jomblang Cave. Trekking and trailrunning are very rewarding in Java. If you wish to explore the deeper world of Javanese mysticism, we at Blueflower organise a trip with Anthropologist Patrick Vanhoebrouck. Click here for the details.